The Order of the Tankard, awarded by the Reich Duchy of Beerstein College of Honors

The Freundschaft Order, awarded by Grand Duke Karl of Hetzenberg

I decided I might as well face the truth, that this blog and project is pretty much over and done. It was fun while it lasted, but my gaming interests lie elsewhere these days.

I dislike leaving things hanging though, so to wrap things up, here follows the rest of the history of the League and the war:

The war between the Soweiter League and the Batrachian Empire raged on for a while, with both sides becoming increasingly exhausted. In the end the hostilities petered out and peace broke out. The Batrachian Empire descended into revolution and civil war (the royal side wearing the traditional tricorne-era uniforms; while the rebels tended towards the new model of uniforms worn by armies of the Napoleonic era). General Soleau tried to establish a "republic", but was ultimately defeated. The Batrachian royal line merged with the nobility of Mayeaux, with Mayeaux and Batrachia combing to become the kingdom of Mayeux. With the pressures of war gone and the need for cooperation greatly diminished the Soweiter League disbanded, with the various states going separate paths. The Germanic member states joined with and were subsumed into a Germanic confederation (the Confederation of Ostphalia). Mayeux joined with Batrachia, as mentioned, to become its own nation-state. The English-speaking states of the former Soweiter League united into a new nation, which was named Freedonia. And Santa Sofia remains on its own as a micro-nation in the hilly wine country somewhere between Germany, Austria, and Italy.

Any future miniatures, games, or other hobby stuff, will be posted in my other blog, Tales of Mirth.

Merry Christmas to all and to all a good night!
Posted by Fitz-Badger at 6:33 PM 7 comments:

After a recent expedition "down under" a couple of new animals have been added to the national zoological gardens. 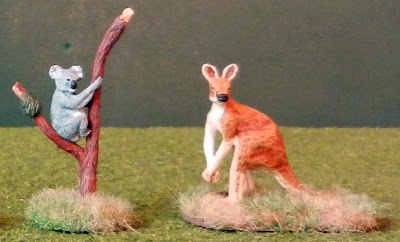 If I recall correctly these are from a Reaper Miniatures "familiars" pack.
Posted by Fitz-Badger at 11:35 AM 4 comments:

No new miniature pictures today, but I'm slowly working my way through my old lead pile.Prepping miniatures, and painting again. Some are fantasy figures, which I will post on my other blog as they are completed. Historical (or imagi-nations) and VSF stuff will be posted here as they are completed. Among the historicals I have some lancers prepped and awaiting their turn on the painting desk. I was pleased to find some plastic toothpicks that I think work well for the lances.

For those interested in ships of the mid-1800's I found an interesting book in Barnes & Noble, Ships of the Civil War 1861-1865. I don't know much about the ships of the era (or any era for that matter), so I can't vouch for accuracy. Basically the book consists of 2 page spreads on each of about 100 ships of all different types, from "riverine gunboats through ironclad steamers, to wooden sloops and paddle-driven cruisers" (as the blurb on the back states). Each one has details about size, armament, number of crew, speed, etc; along with a brief history; with a full-color illustration of the ship on the facing page, mostly side views of each ship. If nothing else it might be a good source of inspiration for anyone wanting to build ships or even a navy of the era.
Posted by Fitz-Badger at 1:28 PM No comments:

More Guides and a Pathan

I'm slowly getting some miniature painting done, and hope to pick up the pace a little as the long hot Summer slowly cools down. For now, here are a couple more Guides, one of the regular Indian troops and an officer. And a Pathan. All Foundry miniatures from the lead pile. 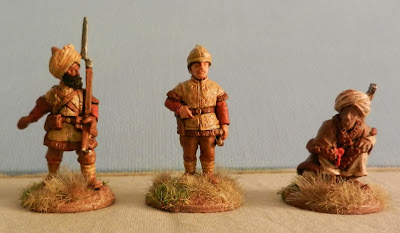 I created some more rock piles/rocky/rough ground (rocks made from cellu-clay), stands of vegetation that can stand in for elephant grass (long grass-like plastic aquarium plants), and based some old conifers to add to my old tree stands. All bases were cut from mdf board.

The vehicle is a steam tank I made from a plastic Mott's applesauce container (molded to look like half a barrel), some mdf board and pine wood, a dowel, a wooden peg from the craft store (for the smokestack), a button, some gears, a washer, and a plastic stick from some old toy (for the gun barrel). Here are some closer shots with a 28mm Foundry figure for size comparison. 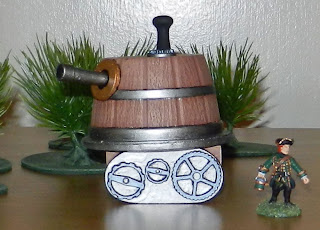 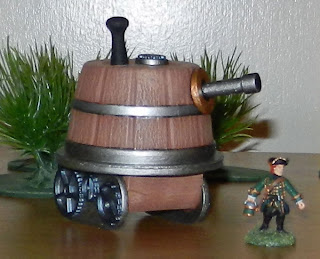 The top and bottom are not glued together, but have a dowel and hole so the top can be rotated. 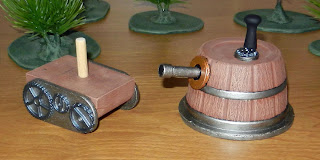 As far as gaming goes, I've mostly been playing boardgames and card games this summer, games such as Wrath of Ashardalon and the Lord of the Rings card game, as they can be played solo as and when time and energy allow.
Posted by Fitz-Badger at 2:38 PM 4 comments:

I'm not sure where or how I will use these, but I couldn't resist.
Brontotherium (the large gray Rhinoceros-like beast) and Daedon (the smaller brown warthog-like beast) 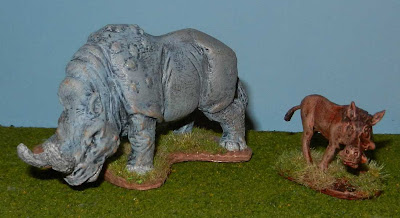 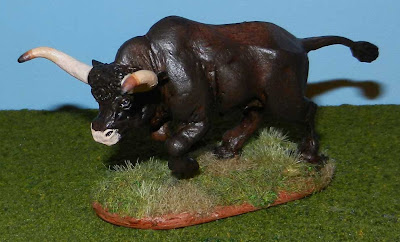 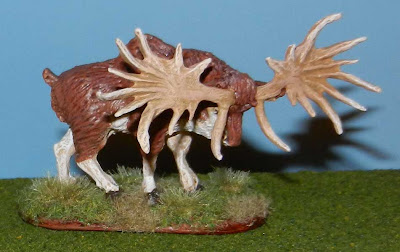 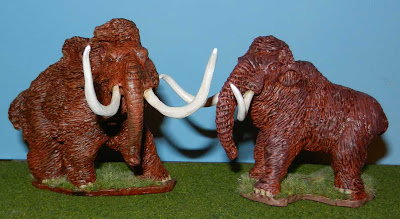 All figures from Acheson Creations. Except for the daedon these critters are mostly resin, only the mammoth tusks, bull horns and forehead, and deer antlers/ears are metal. The daedon is a single-part metal miniature. These are a bit large for 28mm, probably more fitting for 40mm.
Posted by Fitz-Badger at 7:02 PM 3 comments:

Google Reader is being closed down

Sorry for the off-topic post, but Google is reporting that they are closing down Google Reader. According to Google not enough people use Google Reader to make it worth their while to keep it going. So my question is how do people keep up with all the blogs they read? I'm not particularly adept with the tech stuff, and especially not with all the various "social media" type things, so I'm looking for alternatives that are pretty easy to use. If anyone reads this and has any helpful advice please let me know. Thank you!
Posted by Fitz-Badger at 6:45 PM 7 comments: