The Order of the Tankard, awarded by the Reich Duchy of Beerstein College of Honors

The Freundschaft Order, awarded by Grand Duke Karl of Hetzenberg

Song of Lace and Tricornes

Actually, Songs of Drums and Shakos. I used those rules from Ganesha Games for a quick little raid (quicker than I expected!). The rules are designed for Napoleonic skirmishes, but I figured at the skirmish level there wouldn't be enough difference between the earlier tricorne era and the Napoleonic era to worry about.

The situation was a corral of cattle being guarded by the Batrachians (using French stats of course), with the Soweiter forces on a foraging mission/raid. This takes place at dusk so visibility is limited. The scenario is taken from the rules. Here is the initial setup:

The Soweiter forces include Captain MacDonall of the Gunderland Highlanders and 6 Highlander infantry (using the Highlander stats, imagine that), and 1 light infantryman from Ballyfoole. Captain MacDonall sent the light infantryman to the south of the road to infiltrate through the woods and try to take out or at least distract the 2 sentries at the corral. Meanwhile the Captain and his squad of Highlanders approached through the woods north of the road to attack the main camp of Batrachians.

In these rules you roll dice to activate figures, leaders like the Captains, can order a group if the leader makes his activation roll. You can choose to roll 1, 2, or 3 dice and 2 failures on a roll of the dice means the action switches over to the other side. This scenario had some special rules that certainly affected the final outcome of this game.

As it turned out the Batrachians moved first, but under the scenario rules that only meant the sentries moving, circling the tent or pacing in front of the gate. Next, Captain MacDonall ordered the Highlanders to move up to the edge of the woods, and the light infantryman also moved through the woods to the south and up to the lone tree. About as close as he could get to the sentries by the corral without being seen. 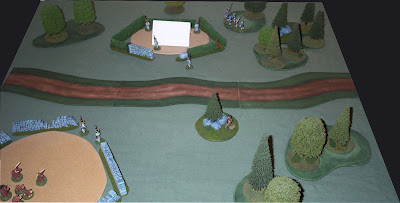 The sentries continue pacing back and forth and around. Suddenly shots ring out all around! The Highlanders kill one of the 2 sentries closest to them, while the other sentry falls to the ground (diving for cover no doubt). 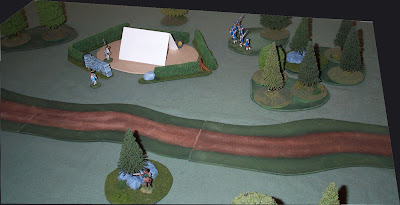 The light infantryman is still getting set up (failed his activation roll so play passes to the Batrachians).
The Batrachian officer, Captain le Blanc, reacts to the gunfire and tries to rouse his men, but they are slow to act (they failed their activation roll).
The Highlanders reload their muskets. Meanwhile, the light infantryman takes an aimed shot at the closer of the 2 sentries at the corral gate. The sentry dives for cover.
Captain le Blanc and Sergeant Gaston come out of the tent, but the rest of the men fail to followup (failed roll).
Captain MacDonall orders his men to fire a volley at the Batrachian officers, killing Captain le Blanc. Sergeant Gaston's nerves fail him (fails his morale throw) and the Batrachians surrender. The Soweiter forces will have some beef to drive back to their unit tonight. 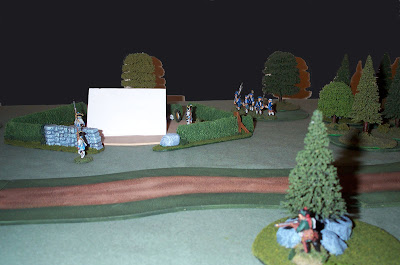 Like I said, this game played very quickly, due to the scenario rules that specified if the defender's leader was killed and the NCO failed his morale roll it was all over. The other possibility would have been the NCO passed his morale roll, at which point he would be considered the leader with attendant abilities and bonuses to the troops. Then each of the defenders would have to roll for morale. The NCO could've then called on any of the infantry who passed their morale, and would have stood a decent chance against the Highlanders, I think. Sometimes things just go well for one side or badly for the other.
In spite of that, the Song of ... seem like a good fun set of rules for small skirmish and man to man (or other creatures) actions. I bought the "bundle" quite a while ago, including mostly the fantasy stuff, but this was the first time I got around to trying any of them. I think they will be good for "quickies", especially if I play enough to get the rules "down".
Posted by Fitz-Badger at 6:26 PM

As a compulsive ruleset buyer I have buyed Songs of Drums and Shakos. I'll try it!
Regards and Happy New Year
Rafa

Thanks, Alan! Yes, the whole fantasy set might help me get out some of my old fantasy miniatures.
Yeah, I tend to be a somewhat compulsive ruleset buyer, too. I'll be interested to see how you get on with the rules, Rafa, if you get around to playing any games with them. They are also coming out with a companion set for larger battles, which I may buy just to see how they work things out and if it could be readily adapted for the tricorne period, for example.

Great looking game and a top batrep. Thanks for sharing. We play SDS for Naps but I also have plenty of SYW figs which might get an outing after seeing this!